“Discovery is what everyone sees, and no one has ever thought about it before.” – Albert Szent-Györgyi, an American of Hungarian origin, Nobel Prize winner in physiology and medicine. 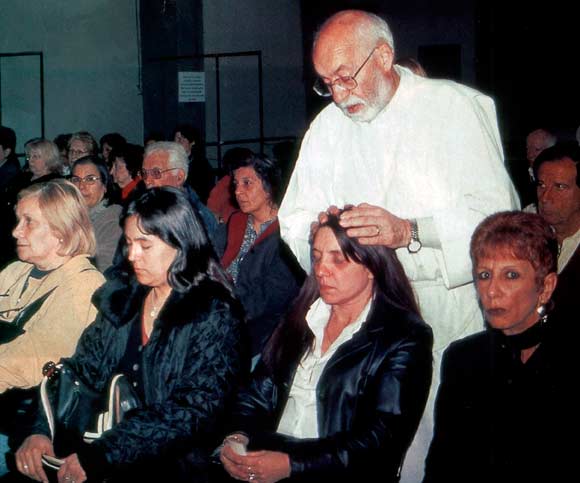 Catholic Church of the Merciful Jesus in Buenos Aires, in the Villa Urquiza district. One of the priests, a disciple of Padre Pio, initiated the treatment of overlaying his hands, which has

now become a mass phenomenon. On the 26th of each month, dozens of buses from all over Argentina arrive with the sick. In this way, the priests restored the practice that Christ had given to His disciples, the gift of healing from the divine gift. In this way they repeat the gesture recorded in the Gospel of St. Mark (15:18) “they will put their hands on the sick and heal them.”
Healer during “work” at the Natural Medicine Fair in Warsaw. 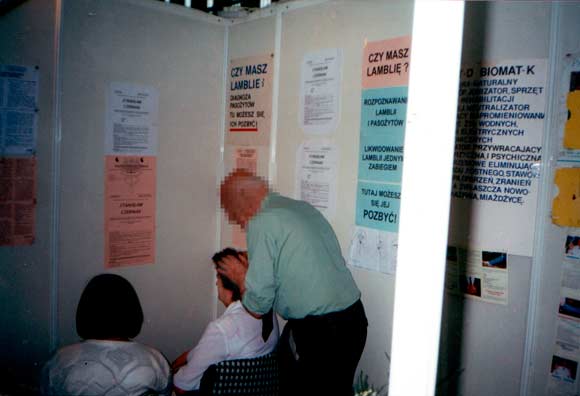 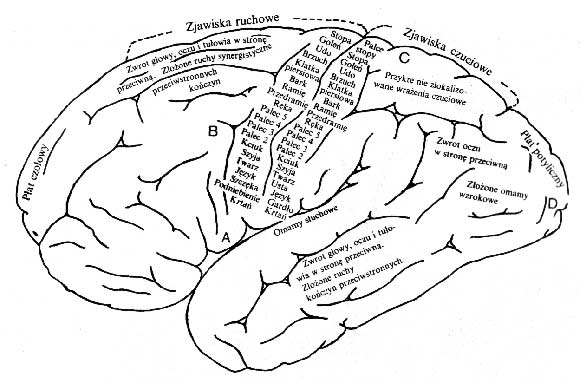 Side view of the brain with listed central nervous system centres.
In this photo we see the priests of the Catholic Church who keep their hands close to their ears, where there are centres that control the throat, internal organs of the abdomen and hearing. As we know, the king “healed” ill people from the illness of so-called “Scroogles” – tuberculosis of lymph nodes. Patients after such holding, which probably lasted a long time before the king approached the waiting person, must have felt a huge relief, mainly in the area of throat and ears, where amongst others lymph nodes are located. 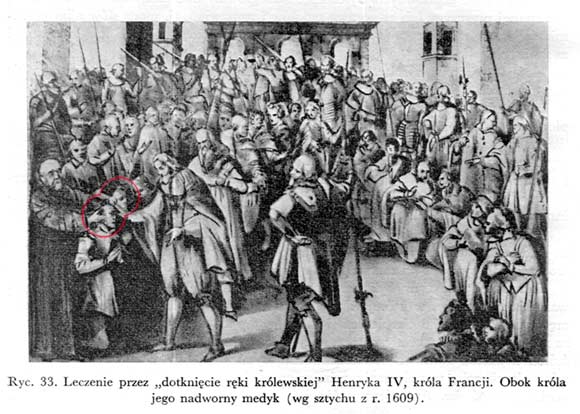 On both photos at the top both the representative of the Catholic Church and the healer hold hands on heads of sick people in the same way. Looking at the brain figure, we already know that they cover practically all the centers of the Central Nervous System. It is the impact of hand radiation on the sensory centers that manage the sick part of the body that causes healing reactions. We can also see that both have very large hands, which allows to cover also the centers managing the throat, and the internal organs of abdomen, which are located in the area of auricle, and which are not visible on the diagram. From all these photos and drawings of the brain it stems conclusively that it is not God who heals nor the devil as the church representatives claim. It only heals when you keep your hands on your head.
To this day, people who do not know the B.S.M. Methods, do not suspect that holding their heads in these places causes healing reactions. The healers also did not cure in this way until the discovery of this Method.

And it seems so easy now!

However, I do not advise you to keep your hands on the sick without getting acquainted with the book written by me entitled “Self-healing with B.S.M. method” and the accompanying film on a CD. The knowledge of treatment in this way was available only in the form of a healing ritual. The only thing that mattered was the cure. It can be dangerous to keep your hands on your head where there are central nervous system centres without considering all objections and remarks. Certainly not one person so healed has been harmed, but this has been explained, and it is explained further on, that the sick person believed too little in the healing or that it was “God’s will.”

The ignorance of this Method by churches is surprising. Similar rituals are performed in Anglican and Protestant churches. While the ignorance of doctors can be somehow understood because they feel a threat to their existence, the reluctance to disseminate it among the faithful has nothing to do with the humorous shouting about the protection of life and help of neighbor in suffering. Assuming even that churches will NOT be able to induce miraculous healings. After all, the same phenomenon which is the possibility of healing with own bioemanation reinforces rather than diminishes the faith in God. Let the words of Dr. Harold Saxton Burr, the discoverer of the Fields of Life, be used to guide us in our thinking after we have learned the Method. “The cosmos in which we find ourselves and from which we cannot be separated is a place of law and order. It is neither a result of chance nor chaos. It is organized and maintained by an electromagnetic field, capable of determining the position and movement of all charged particles. This space makes sense just as much as our existence makes sense. And even though we don’t understand it, it does exist.”

All new discoveries depend on dropping a dark curtain, which was the knowledge and science received so-far. In case of the B.S.M. Method, it is only useful for diagnosis, immediate assistance and possible control of treatment. According to Hippocrates’ saying “Natura sanat, medicus curat – Nature heals, the doctor watches over.” Ignoring the Fields of Life discovered already in the 1940s by Dr Burr of Yale University, and now ignoring the B.S.M. Method, is due to one reason only. The medical corporations don’t see the financial interest in these discoveries. The B.S.M. method destroys the value of money in medicine. Even assuming that we build instruments to replace our body(hands), they cannot be expensive, because most will be treated without them. The pharmaceutical industry would be limited to the production of building materials and physiological components of our bodies, and only to a limited extent. However, further development of medicine is possible if it is aimed at a significant extension of human life. People who use B.S.M. due to the elimination of diseases and ailments, are able to prolong their lives. Eliminating circulatory problems, people I know live to be eighty and would die a long time ago. The future of medicine will also be the adaptation of man to

life on other planets, on one condition that we are thrown off the chameleon of the excessive value of money in relation to knowledge and science. It is the people of knowledge and science who should decide what is good for us, not the people for whom the short-term financial interest comes first. They hamper the development of science and research that are beneficial for improving people’s quality of life. Now they have been given a free treatment with the B.S.M. Method, which eliminates pain and suffering, removes disability, but they would like to continue to get rich by selling unnecessary products and services. The most striking example of the weakness of current financial conditions in relation to science is the example of the space shuttle Discovery. It’s been four years now, and scientists can’t cope with the flaw of heat plates detaching from it, so the crews of ferry are constantly threatened by disaster. The same conditions threaten us with a global catastrophe.

Similar behavior can be observed in the church. Instead of instructing the Hierarchists to promote self-healing methods among the faithful and to praise God for having given us such opportunities, the Hierarchists do not say anything about it. The B.S.M. Method makes everyone equal. It can be treated by Christians as well as by Buddhists and followers of Muhammad. Jews and atheists can also be treated. No religion is privileged to “miraculous healings” anymore. The only privilege with respect to healing given by God to the Christian religion is the message of Jesus Christ about healing by putting on hands. Knowing about the discovery of B.S.M. Method and comparing the old Hebrew and Greek Bible translations used by non-Catholic churches, we can see that the words of Jesus in the new Greek translation have been changed for the Catholic Church. According to the old faithful translation, Jesus Christ spoke after the Resurrection to 11 disciples here according to St. Mark’s Gospel: Snakes (electromagnetic waves) will take, and whatever the deathly they drink will not harm them; they will lay their hands on the weak (diseases) and they will have good things. In the Bible used by Catholics it is as follows: they will take snakes in their hands, and even if they drink some poison, nothing will hurt them; they will put their hands on the sick, and they will feel good. Of course, the first translation talks about self-healing, the second conceals this possibility. In turn today the Christian and especially Catholic church ignores the possibility of self-healing in this way using its own religious rituals, which presently not only ridicule this ignorance, but also cause tragic consequences for believers whom the church does not want to inform about the B.S.M. Method. We can say it’s laughter through tears. Let us remember that Catholicism in Greek means the word universality. So it is the hierarchy of this church that should especially take care that words of Jesus Christ are not changed and that they sound continually in the entire world. Therefore, it is from the inspiration of our Catholic Church that action should be taken to unite all religions. This is not so, because the teachings of Jesus are less important for the hierarchy than their own conformity, disturbed by the possibility of such a symbiosis.

Nowadays, as always in history, churches cooperate with business corporations and state authorities. State authority must take them into account, because they give them potential voters.

Business finances these elections. This is a very favorable situation for church institutions. In this circle there is no place for a joyful and life-long discovery and “respect your neighbor as yourself.” Unless you let science people into it with a deciding vote.